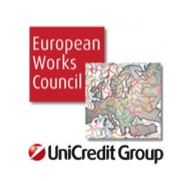 The Group Central Management provided a comprehensive overview of the CEE Division and Corporate Investment Banking strategies – both segments still being very profitable for the Group – and illustrated the strategies underlying the bank’s future service model. Pilot projects on digitalization, around which said strategies revolve, are being implemented and tested in the CEE region.

During the meeting, the Group Top Management presented 2016 1Q results. The workers’ representatives took this opportunity to restate that management decisions to slash headcount and outsource businesses – which EWC had always been sternly against – missed out on the targets set out in the 2014-2018 Strategic Plan, this, too, consistently opposed by workers’ representatives.

EWC asked the Group to preserve its current international footprint, the number of subsidiaries and jobs, rejecting any potential disposal and/or business outsourcing.

Regarding sales pressures, EWC voiced the need for agreements on responsible sales to be negotiated and clinched in all the Countries where the Group operates, based on the recent signing in Italy of the agreement implementing the Joint Declaration on Responsible Sales which EWC and Unicredit signed a year ago. EWC acknowledged the Top Management willingness to entertain a dialogue on this topic with workers’ representatives (Unions/local Works Councils) in the various Countries.

EWC emphasized the role of Social Dialogue as a key tool to anticipate change and drive the digitalization consequences. Said dialogue has been successfully pursued in managing the Strategic Plan fallout in Italy, Germany and Austria.

The Group Management expanded on the Gender Balance project, too. Based on the data provided, the project seems to be making a slow progress – which EWC considers insufficient – towards gender equality across managerial positions. EWC noted that policies for work-life balance need be negotiated with workers’ representatives for truly equal career opportunities and compensation to be achieved.

EWC expressed its concern regarding the possible implementation of strongly shareholder-friendly policies, which may entail heavy repercussions on both Workers and Customers.

Today, the Head of Unicredit Group HR informed EWC that the Board, in its extraordinary meeting held yesterday afternoon, resolved to replace the CEO. EWC is grateful to Mr. Ghizzoni for actively and consistently partecipating in this Council proceedings. During his mandate, Social Dialogue was one of the distinctive features instrumental to managing the impact of the different Business Plans.

EWC expects the new CEO to warrant the same high quality and effective dialogue between the social Partners.