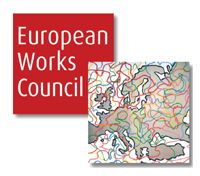 After having signed the agreement between the S.N.B. (Special Negotiation Body) and the UniCredit Management in January the first UEWC (UniCredit European Works Council) meeting took place in Milan on 19, 20 and 21 September. The meeting in which 44 representatives of more than 147,000 employees of the 27 countries where UniCredit has branches, was held in the Head quarter of the UniCredit Group.

The first day was entirely dedicated to the election of the EWC’s internal bodies, such as the President, Vice-President and Select Committee.

Our colleague Andrea BONANSEA was elected President, Peter KOENIG was elected Vice-President.
Beside the President and the Vice-President, the newly-elected Select Committee counts our colleagues Angelo DI CRISTO, Ezio MASSOGLIO, Wolfgang HEINZL, Dariusz KIZIAKIEWICZ and Karl Heinz SPRENGLING.
Subsequently, the EWC members in an initial discussion debated on the future working modalities of the EWC (if necessary through the constitution of workgroups), the need for an internal EWC regulation, the modalities of information distribution inside the EWC and, above all, among the Group’s more than 170,000 employees, after the Capitalia operation.

The second day was characterized by the information given to the EWC by the UniCredit management. The Group’s Chief Human Resource Manager Rino PIAZZOLLA inaugurated the session, followed by the intervention of the CEO Alessandro PROFUMO, providing a comprehensive status analysis of the Group, confirming that, in spite of the precarious situation of the financial systems, the Group’s development is encouraging and solid.

In a video message, the UNI (the international federation of the tertiary sector trade unions) General Secretary, Philip JENNINGS, congratulated the participants on the foundation of the EWC and wished that it may be an instrument that facilitates the social dialogue inside the UniCredit Group in the countries in which the Group is represented.

The consultation phase, that had started on September 20th following the management information, continued the day after. During the consultation with the company the EWC has submitted to the Central Management four groups of problems:

=> Commercial policies that translate into pressure on the employees, to reach little transparent and often unachievable aims. This pressure is sometimes unbearable and harmful for the employee’s dignity. Greater correctness and rules are therefore needed, for every country, transparent and widely accepted. The working hours must also be respected and overtime must be paid according to the national regulations. EWC has asked that the dialogue with the trade unions and employee representatives is searched on these items, too.

=> The reorganizations and mergers of the Group’s single companies in the various countries must safeguard the occupation and must involve the employee representatives and trade unions aiming at agreements that permit acceptable and non-traumatic solutions. In any case, the recourse to mass redundancies must be prevented. In this context, the UPA situation was emphasized.
Although UniCredit is represented in many countries with thousands of employees, there are countries where the Group’s presence is limited. The EWC has therefore asked to know the intentions of UniCredit concerning the Group’s facilities in: France, Greece, Luxembourg, Spain, Baltic States.

In its answer the Central Management stressed its commitment to respect the national regulations regarding the industrial relations, in transparency and correctness, above all in the current reorganization projects, as well as its will to resolve any situation that contrasts with this principle.
In addition, the Central Management affirmed to supply general information on the Group’s commercial policies and more detailed information on the projects concerning the Group’s European sales network in the course of the next meetings. Furthermore, the central management agreed to meet the EWC in occasion of the approval of the new industrial plan, provided that it has impacts on several represented countries.

In the next few days, the Select Committee will convene to confer continuity and perspectives to the certainly demanding work, in light of the dimension and the quick transformation of the Group.