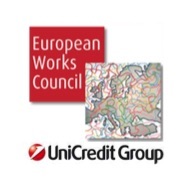 On 26.1.2007 the Agreement for the EWC establishment in UniCredit Group was signed between the Central Management and the Special Negotiating Body, whose members are the 16 countries employees’ representatives in the Group.
It is a really important achievement because, thanks to this Agreement, the 146,700 Group employees, in about 30 European countries (most of which in Eastern Europe) will hold an instrument of dialog and consultation with the Management about the Workers’ importance and about the reorganization, on a European level, of the Group activities.

This reorganization has already started, it is coming on and it will gather speed during the next months; therefore this process must be looked after by an international body such as the UEWC; only the UEWC can dialog with the Management about the cross-border themes and problems, in order to effectively protect the employment and the Workers’ interests, in all the different countries in the Group.

The Agreement is, certainly, the best one in Italy and one of the best in Europe; it defines new benchmarks, at European level, concerning many subjects.

This is the main contents of the UEWC Agreement:
– the Agreement’ long Preamble binds UniCredit Group to act according with the Corporate Social Responsibility (topic not present at all in any other EWC agreement). This Preamble also includes part of the Italian Trade Unions’ Agreement about the Corporate Social Responsibility signed on June 16th 2004 and a similar agreement signed by UNI FINANCE (the international trade union operating in the financial sector).
In particular the Preamble contains the commitment of UniCredit Group to disseminate the social good practice in the Group (this is a new, original element in Europe and it is more important in a Group so deeply present in Eastern Europe).

– The definitions of “Information” and “Consultation” included in the UEWC Agreement has been developed and enlarged compared to most of the agreements in Europe and to the European Directive 94/45 too.

These definitions are consistent with the recent Common Notice for the trasposition of the European Directive about Information and Consultation, signed by the Italian Trade Unions and the Italian Employer Counterparts; this Directive has not yet been assimilated by the Italian Law.

These definitions will make “information” and “consultation” available, in a timely manner, to the UEWC and will make possible to issue joint statements on common guidelines binding the Parts in all countries in the Group, about aspects related to Corporate Social Responsibility such as Training, Learning and professional development, Health and Safety, Equal opportunities and non-discrimination, Labor environmental questions.

This possibility for joint statements is a unique point in the EWC Agreements’ scenario in Europe and it could act as the basis for developing a common view of the problems and for disseminating “social good practices” all over the Group.

– The UEWC’ geographical area gathers all European countries (whether they are UE members or not, like Russia and Turkey); all countries in which UniCredit Group is present will appoint an adequate number of representatives, whose task will be to represent their nation’s Workers in the UEWC.
– “Information” and “consultation” shall relate to a wider number of matters than the European Directive’ provisions. In particular matters concerning restructuring, industrial plans, employment and Corporate Social Responsibility have been widened.

The four plenary, meetings per year are a remarkable achievement; it is also important the possibility of a further meeting, if necessary, to complete the process and to improve the effectiveness of the consultation, between Central Management and the Select Committee, in case , during the first meeting, it were not possible to agree about such matters. This path, also with the issuing of joint statements on common guidelines, gives more strength to the information and consultation processes.

– Italian is the official language of UEWC but interpreting facilities for other languages will be provided, in particular for German, English and Polish.

– Experts may assist the UEWC, one of which firmly assigned to UNI FINANCE: this is a clear recognition of the international banking sector trade union’s role.

– An adequate, specific, training and a workshop at the beginning of each mandate will be arranged, jointly by the Parties for UEWC members.

– The protections and guarantees for the UEWC members are provided according with the national legislation in each country; in any case the Agreement forbids the firing or tranferral of EWC members evenwhen this is not provided for by the law of every single country. This is a real achievement, absent in other EWC Agreements, that are final and binding, considering the strong presence of UniCredit Group in Eastern Europe.

The Agreement signed on January 26, 2007 is an Agreement of great value; it legitimates the UEWC as an instrument for a joint “governance” in UniCredit Group.

Now the real challenge is the concrete realization of the Agreement in order to ensure a continental-scale, balanced growth and respect for employment level, workers’ rights and equality.